This site uses cookies to provide and improve your shopping experience. If you want to benefit from this improved service, please opt-in..
For more information, please see our Cookies Page.
More Info
Ok
Menu
Leather Appeal 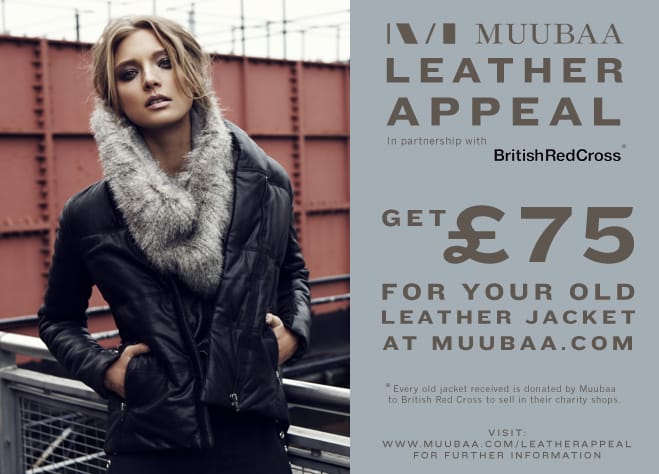 ‘Muubaa Leather Appeal’ launched on Wednesday 1 August 2012, in partnership with the international humanitarian
organisation British Red Cross to help people in crisis both in the UK and abroad.

Having identified that there are over 1,000,000 unwanted/unworn leather jackets hiding in the UK public’s wardrobes, we have made it our aim to get as many of those recycled and resold in British Red Cross charity shops. And what’s more  anyone who sends a jacket will receive £75 off a new Muubaa leather jacket in return.

Muubaa chief executive, Stephen Sacks, explains: “Lots of people have a leather jacket, or two, tucked in the back of their wardrobe that they no longer wear but often it is not thrown out or recycled due to some emotional attachment to it. So these jackets sit around unused and it’s a terrible waste.
“Muubaa are offering people the chance to get rid of their old jacket in return for £75 off a new Muubaa leather jacket, while also contributing to a very worthwhile charity, the British Red Cross. The cost of sending us the old jacket will also be reimbursed.”

Paul Thompson, Head of Retail at the British Red Cross said: “We are delighted that Muubaa have chosen to team up with British Red Cross charity shops for the Muubaa leather appeal. One person’s unwanted leather jacket is another person’s treasure and the money raised in our shops will help people in crisis both in the UK and abroad.”